Tour the Art of Homecoming – a series of twelve murals that start on the Baylor parade route and extend throughout downtown Waco that depict iconic scenes from Homecoming and convey messages of Baylor Spirit. 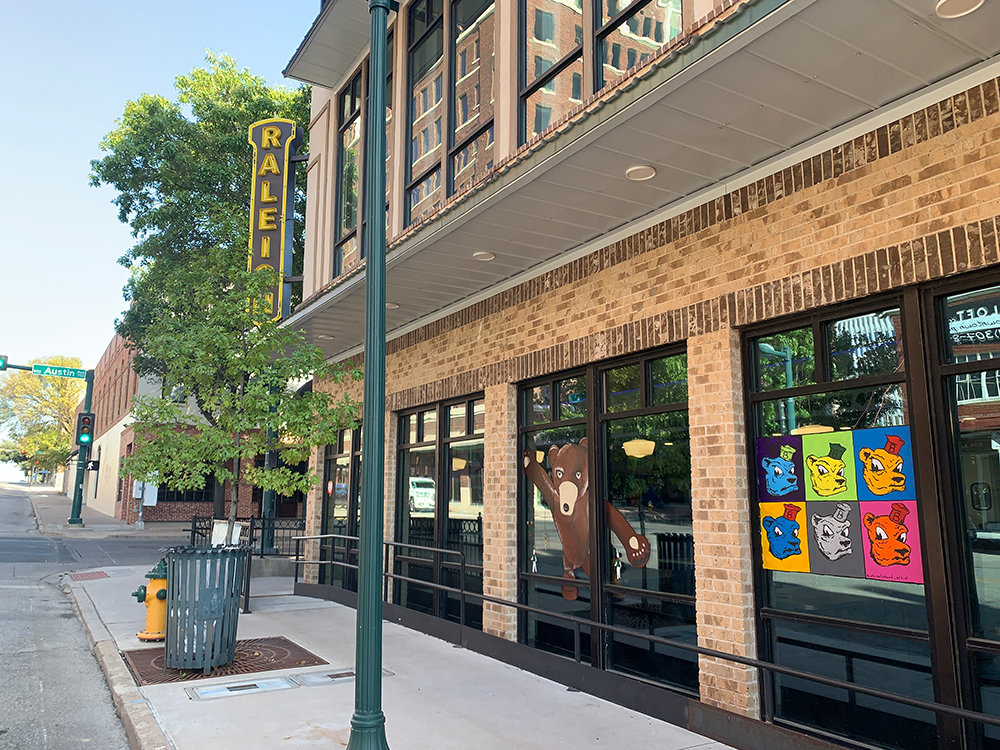 Baylor’s iconic Homecoming parade traditionally kicks off at the corner of 8th and Austin Avenue. As the parade makes its way downtown and onto campus, fan-favorite balloons, such as Bruiser, depicted here, soar above the skyline. Adjacent to the balloon is a series of Andy Warhol-inspired Sailor Bears, a colorful representation of one of the University’s most beloved icons. 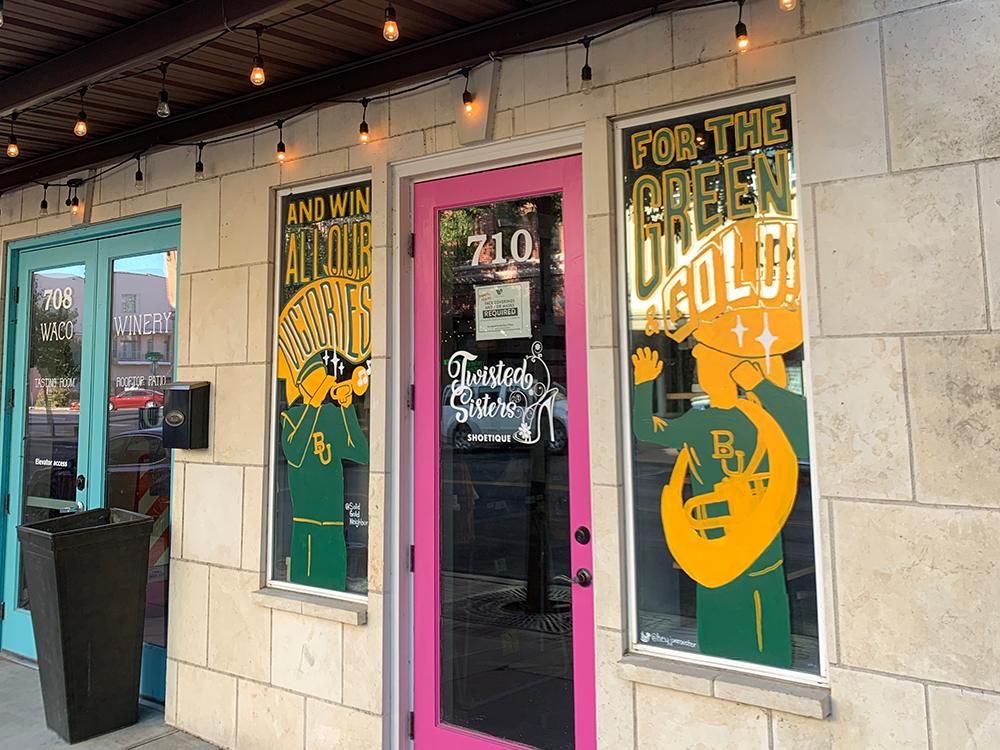 As the parade moves down Austin Avenue, spectators are greeted by balloons, community groups, and the Baylor University Golden Wave Marching Band. This mural celebrates the spirit of our marching band. 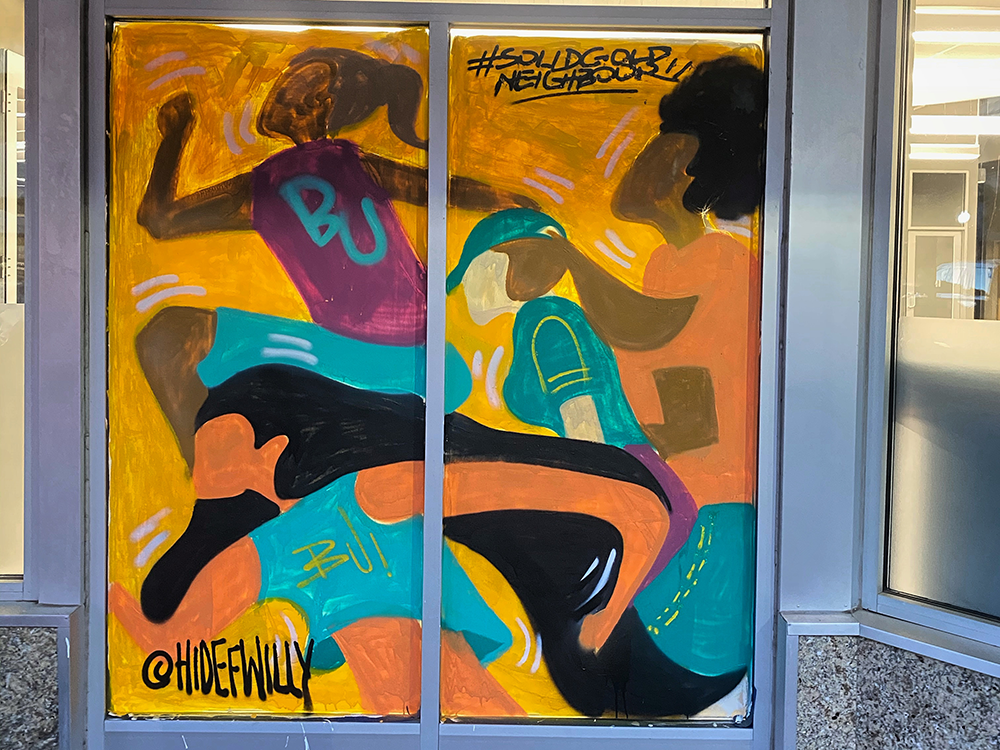 Established in 1970, the Baylor Line is composed entirely of students and represents the commitment of Baylor fans everywhere to support and cheer on the Bears. This mural celebrates the diversity within the Baylor family and throughout the Baylor Line. 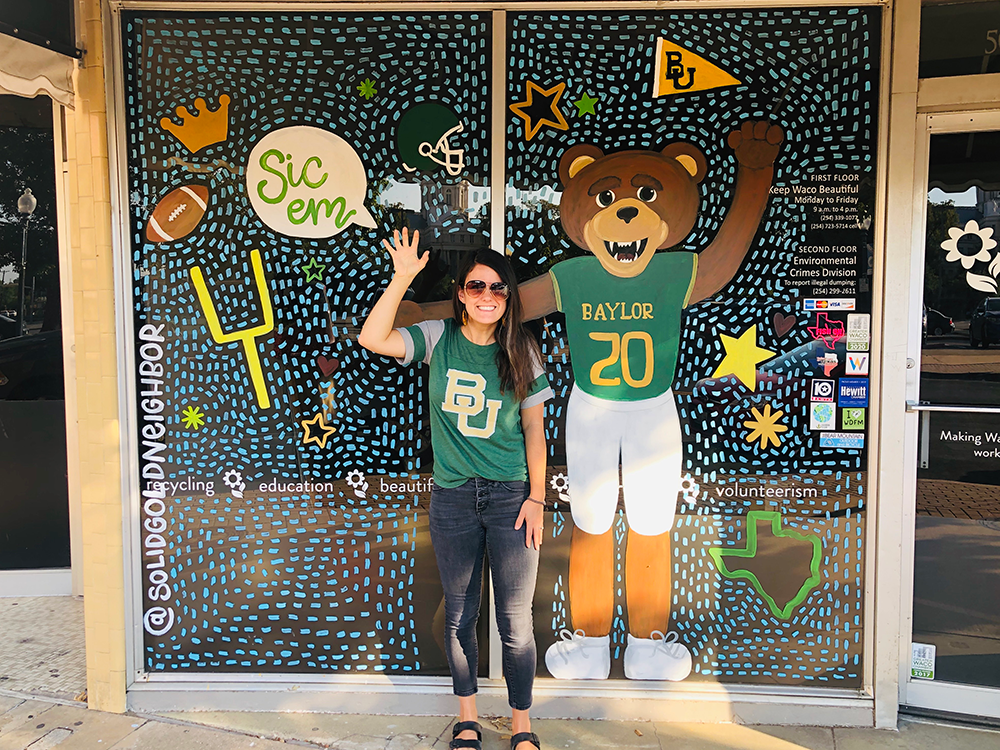 Baylor’s mascot, Bruiser, always makes an appearance in the Homecoming parade. This year, take a photo with Bruiser along the parade route! This piece, inspired by the artist’s son’s love of all things Baylor Bears, gives the viewer an interactive opportunity to fling their green and gold. 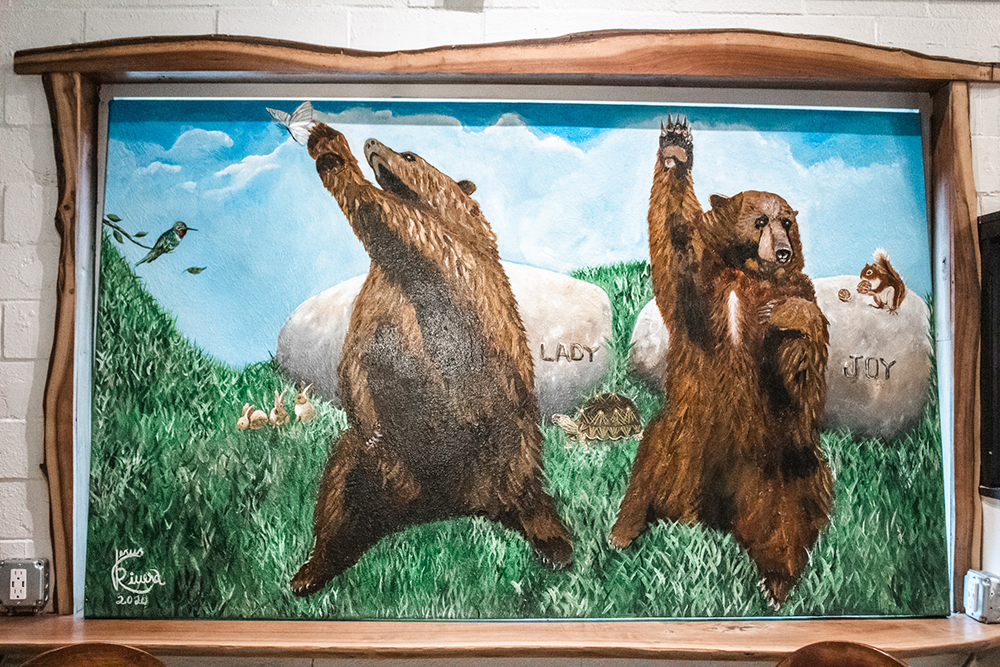 Lady and Joy, Baylor’s live bear mascots, greet visitors to campus all year round. During Homecoming, as alumni, friends, and family return to campus, Lady and Joy await in the Bill and Eva Williams Bear Habitat to greet guests. Housed in the window of Tru Jamaica, this mural is painted on canvas. 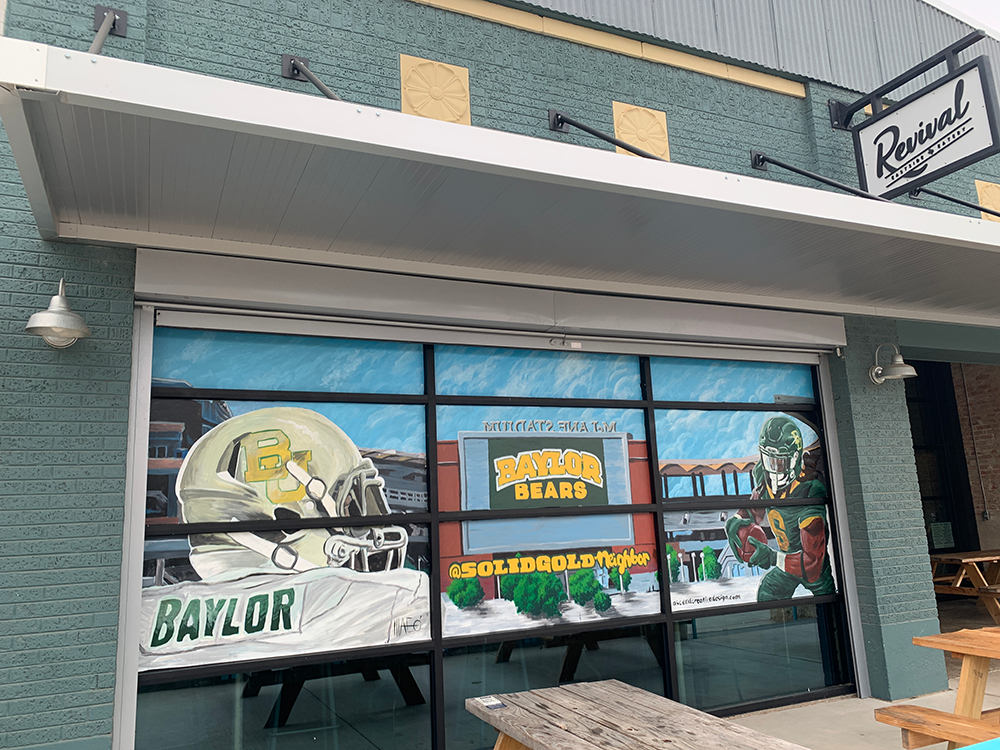 Get ready for Gameday! This mural depicts the gameday experience at McLane, from the stadium, to the players, including the fans in the stands. 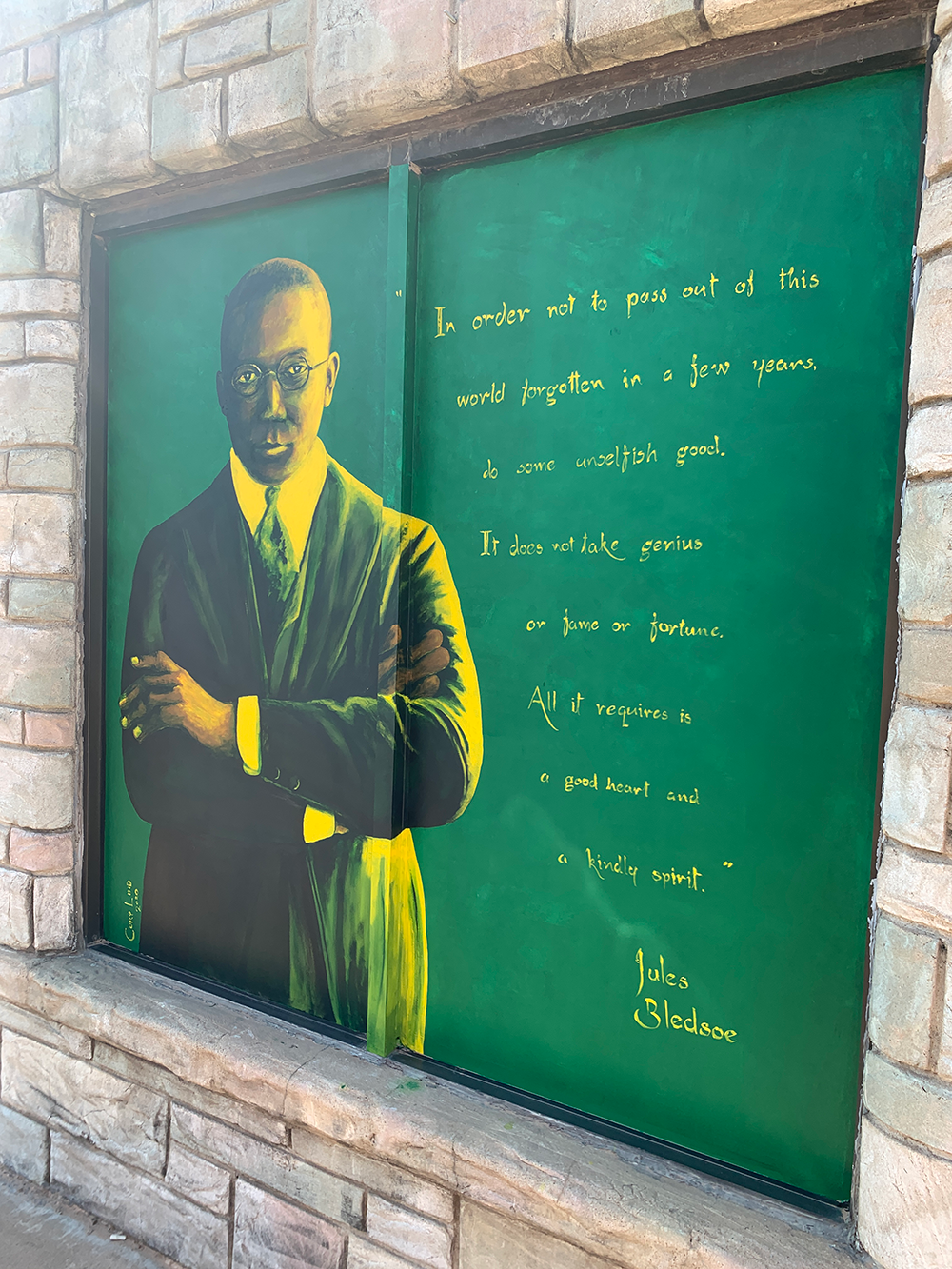 This mural, featuring Jules Bledsoe in shades of green and gold, pays tribute to this native Wacoan and musical pioneer. A gifted performer, Bledsoe became one of the first African Americans on Broadway. Next to the portrait of Bledsoe, an inspiring quote shares a message of hope for all audiences. 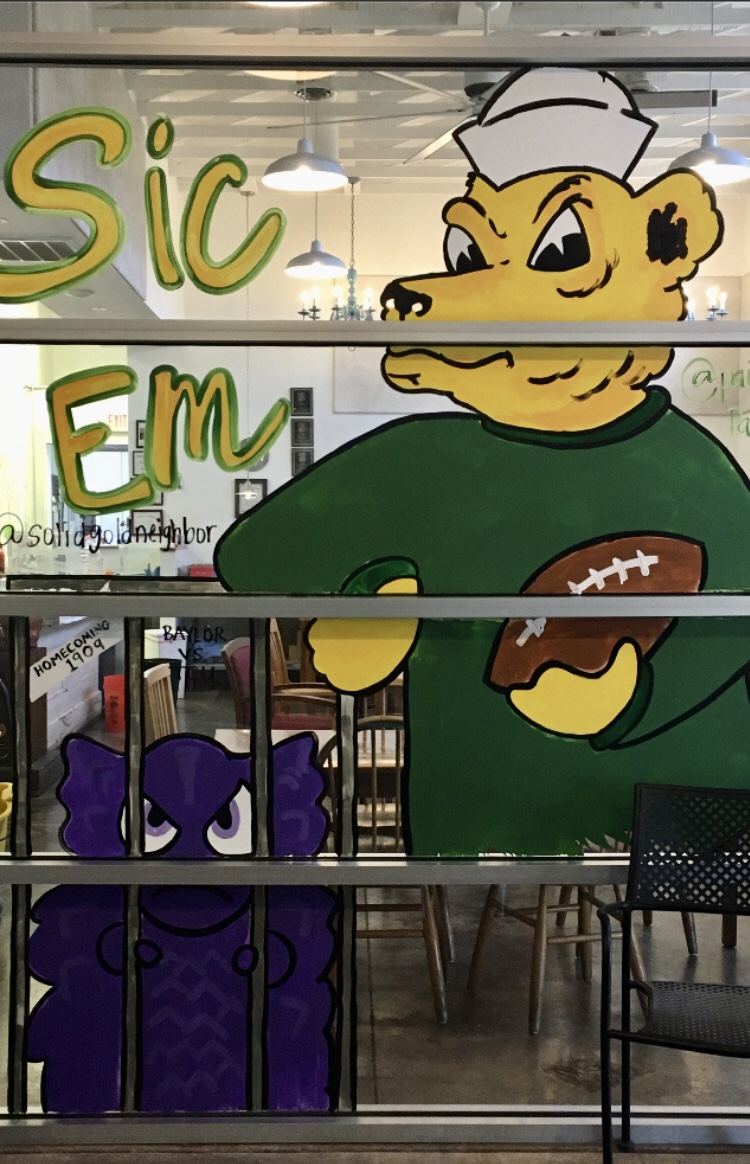 Throughout history, Baylor has faced many opponents for the Homecoming game. The first Homecoming game featured a unique hometown rivalry, Baylor vs. TCU – Waco’s other hometown team prior to their relocation to Fort Worth. This mural puts a modern spin on this historic rivalry, featuring Sailor Bear and TCU’s Horned Frog. 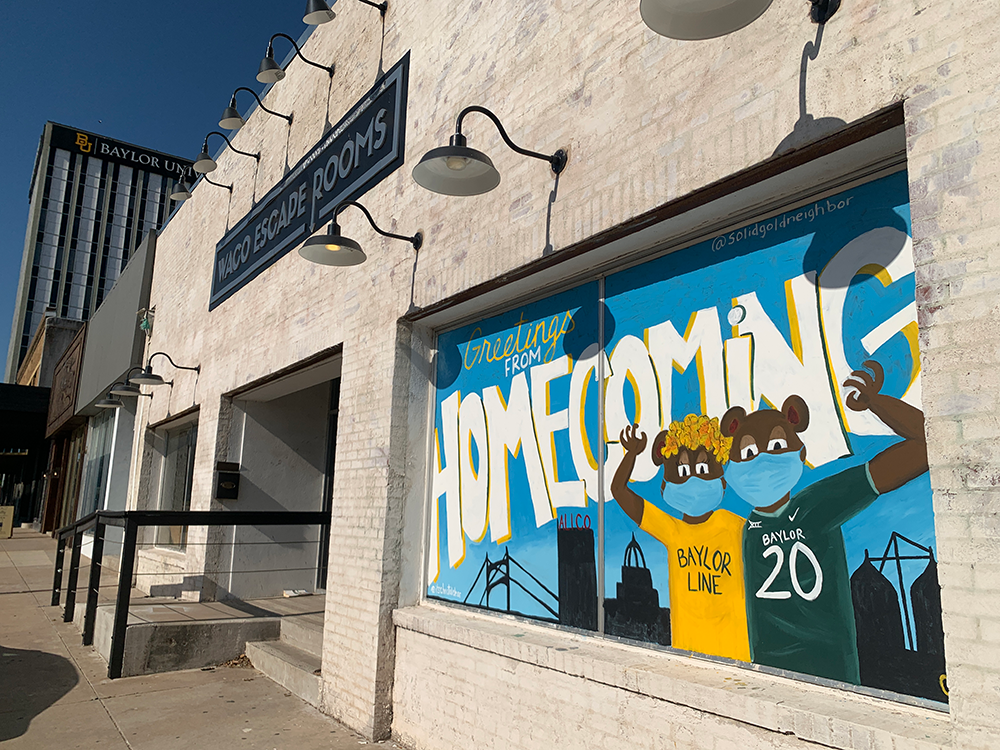 In 1909, Baylor alumni were welcomed back to campus for the University’s first Homecoming celebration with a special postcard. This mural puts a modern spin on that very postcard, featuring Bruiser and Marigold sending Homecoming greetings. 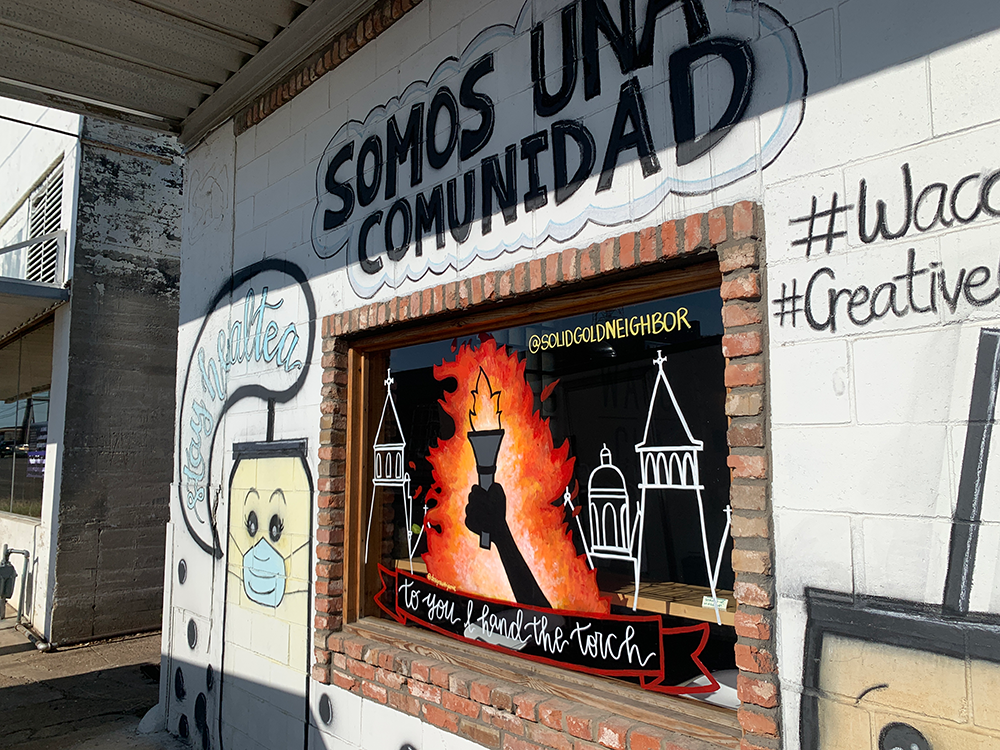 This mural depicts the Eternal Flame, steeped in significance as part of a tribute to the Immortal Ten. The torch, in front of the campus skyline, is combined with words from former Baylor President Samuel Palmer Brooks: “To you I hand the torch.” 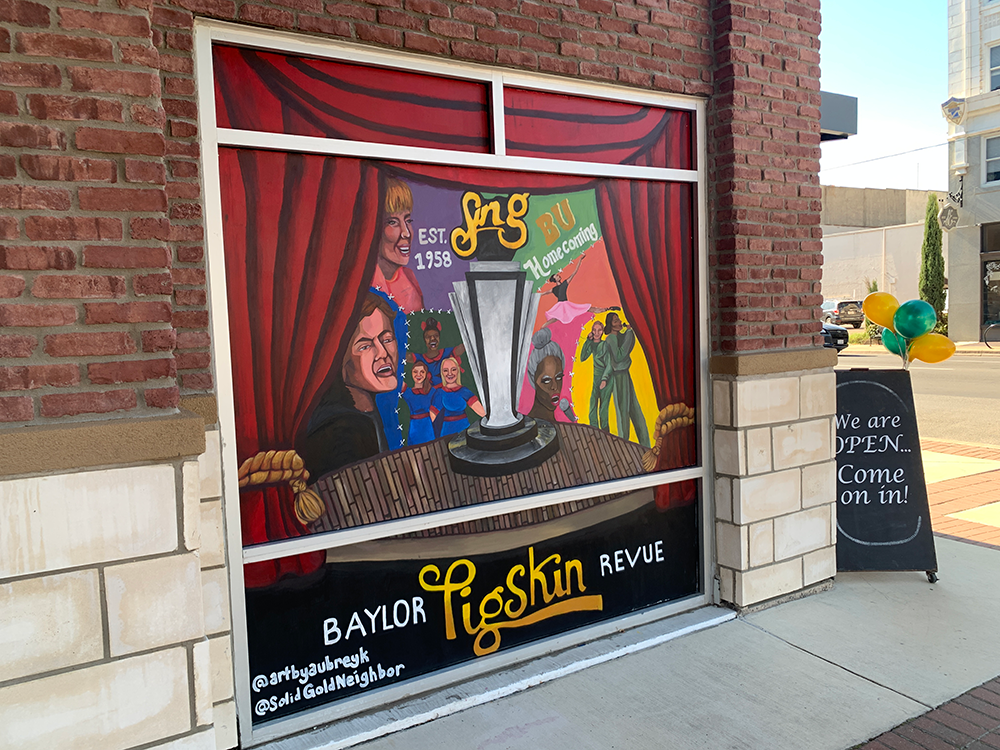 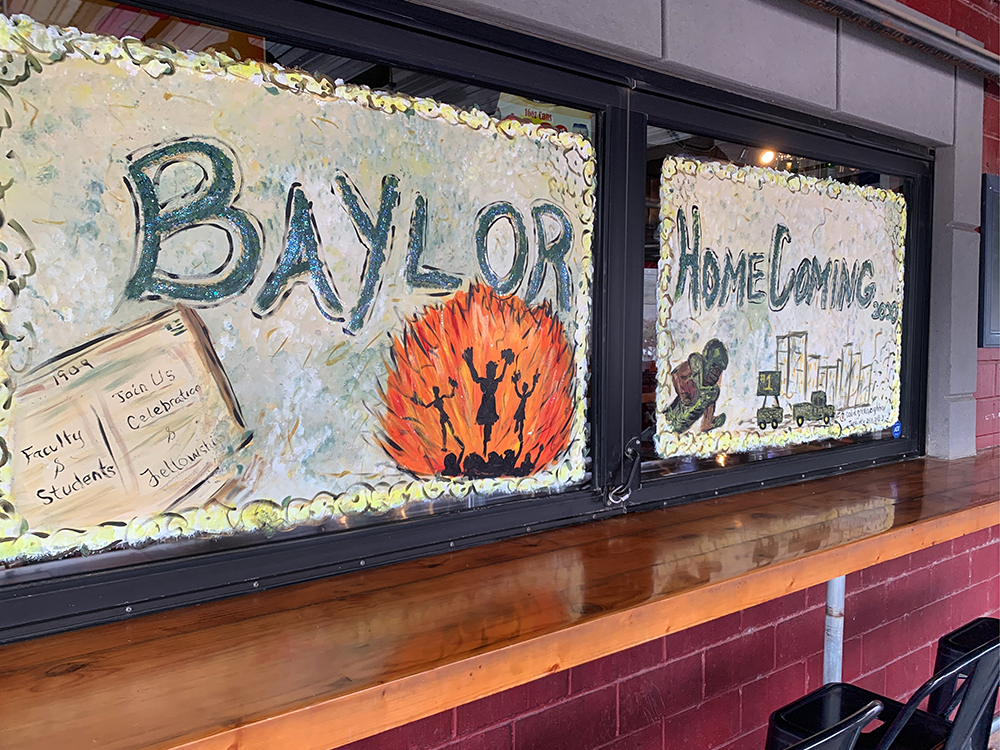 Baylor University’s Homecoming began in 1909, rallying community members from the city of Waco alongside students, faculty and staff to fling their green and gold. This piece showcases and celebrates that rich history – over 100 years of Homecoming!